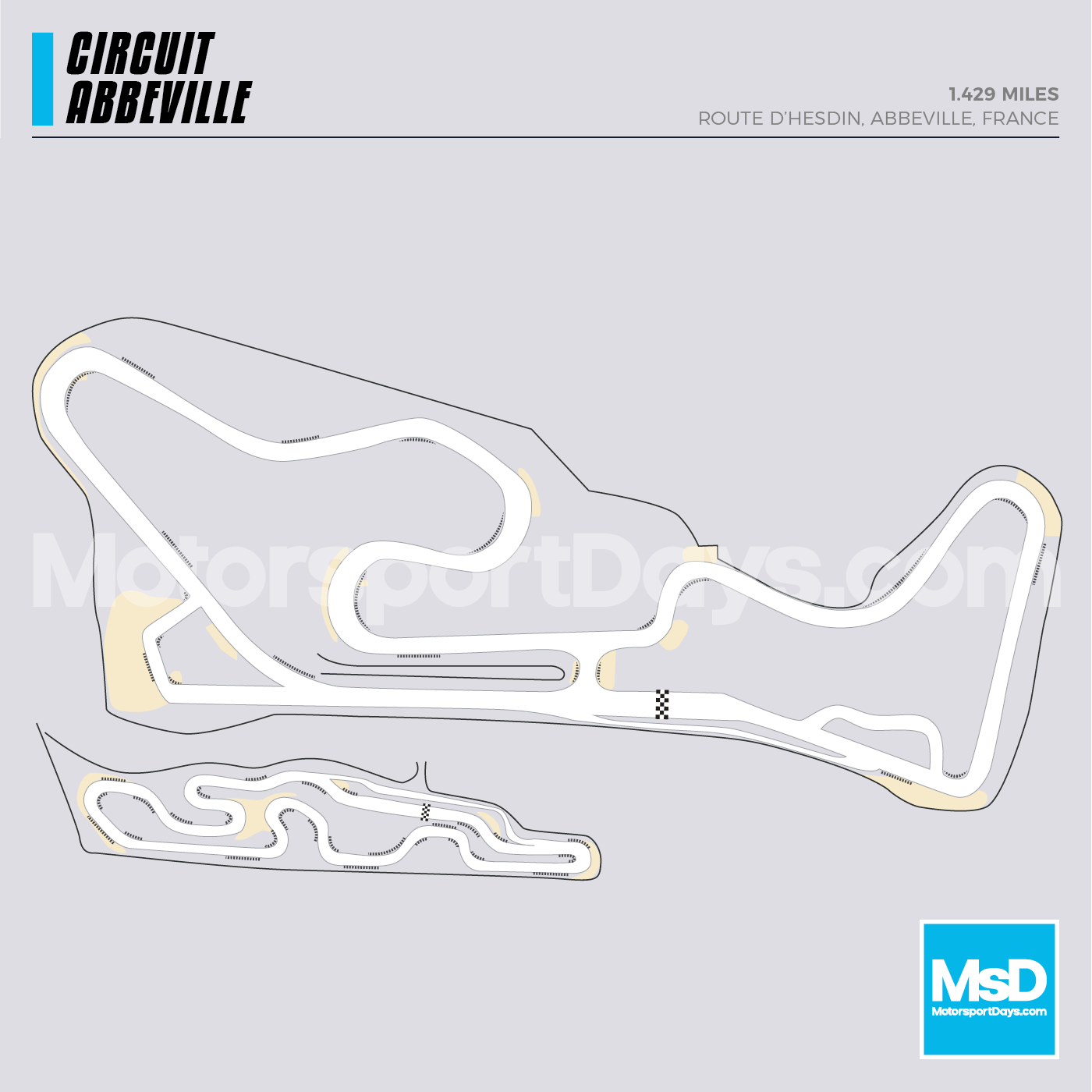 Situated just 45 minutes from Calais with the A16 motorway on one side, Abbeville airfield on another and next door to a kart circuit. Additionally, the circuit has also recently added its own kart circuit on-site which is open for most days for those who fancy a blat.

Facilities are better than you’d expect with a very nice briefing room open all day & there is a small shop selling drinks if the kart circuit is open. For lunch the motel next door has a good restaurant & saves the drive in to town.

A lap of the track starts when you leave the paddock area and enter the track through a short pitlane, making sure to keep to the left because of the potential faster cars behind. The first corner looks like it consists out of two small corners, but it’s too small and narrow there to treat them as such. Late on the brakes you trail brake past the first bit of curbstone on the inside, let the car go to the outside of the track and cut across smoothly for the second part of the corner, where you stick to the right hand side on the exit, as you want to line yourself up for the next left hander. In this first corner, the line you take is more important than the speed you try and carry through there, the car might understeer here when you’re too fast on the entry.

The second corner is a left hander, it’s a pretty straightforward corner, a tap on the brakes should suffice to get you around, clinch the inside curbing and let the car flow to the outside. It’s very tempting to be on the throttle very early, but a lot of people have to back out of it a bit again afterwards, so build up the speed progressively.

Swerve to the left hand side of the track and late braking should help you stay in the middle of this righthander on the entry, and then cut across to the somewhat late apex. Although the Lotus will also stick to the inside all the way around. There’s quite a bit of space on the exit, make sure you use all of it.

After that comes possibly the most exciting bit of the track, you swerve to the right and stay in the middle of the track, go flat-out through the left kink and go straight past the right kink, let car go straight to the outside of the track on the lefthand side under braking, be confident on the brakes as there is enough space for you to do this and you won’t get on to the grass. This lines you up perfectly for a very late entry into the next tight righthander. The apex is right at the end of the inside curbing, which is at the end of the corner, as you want to line yourself up for the next lefthander. This one is basically the corner as the previous one, only to the left, and on the exit you can start accelerating once you’ve hit the late apex. The tail can step out a bit, but when you use the full width of the track, including a bit of outside curbing, you should be fine.

The next left right combination is probably one of the most technical bits. You want to be late on the brakes, trail brake past the lefthander, but make sure you go no further than the middle of the track on the exit. You can cut the righthander quite aggressively as there is enough space on the exit. Once you’ve exited the corner you cut across to the right hand side straight away until you’ve crossed about three quarters of the track. You’ll be able to lift, maybe brake a bit to the next fast left hander. If you opt to go over the inside curbing, this might unsettle the car a bit. Don’t go too wide on the exit as you need to be on the left hand side of the track again for the penultimate hairpin. This hairpin has a late apex as the track is pretty narrow on the exit.

The last corner on the Abbeville circuit is in my view the most satisfying one, late on the brakes, reasonably early entry (maybe even a bit of a flick), and early on the throttle as you exit, the outside curbing is very high and will help you catch the car if it snaps a bit.

You ignore the kink to the left as you get onto the main straight. Just let the car flow to the right and go back to the left smoothly afterwards, mind the cars exiting the pitlane on the left.