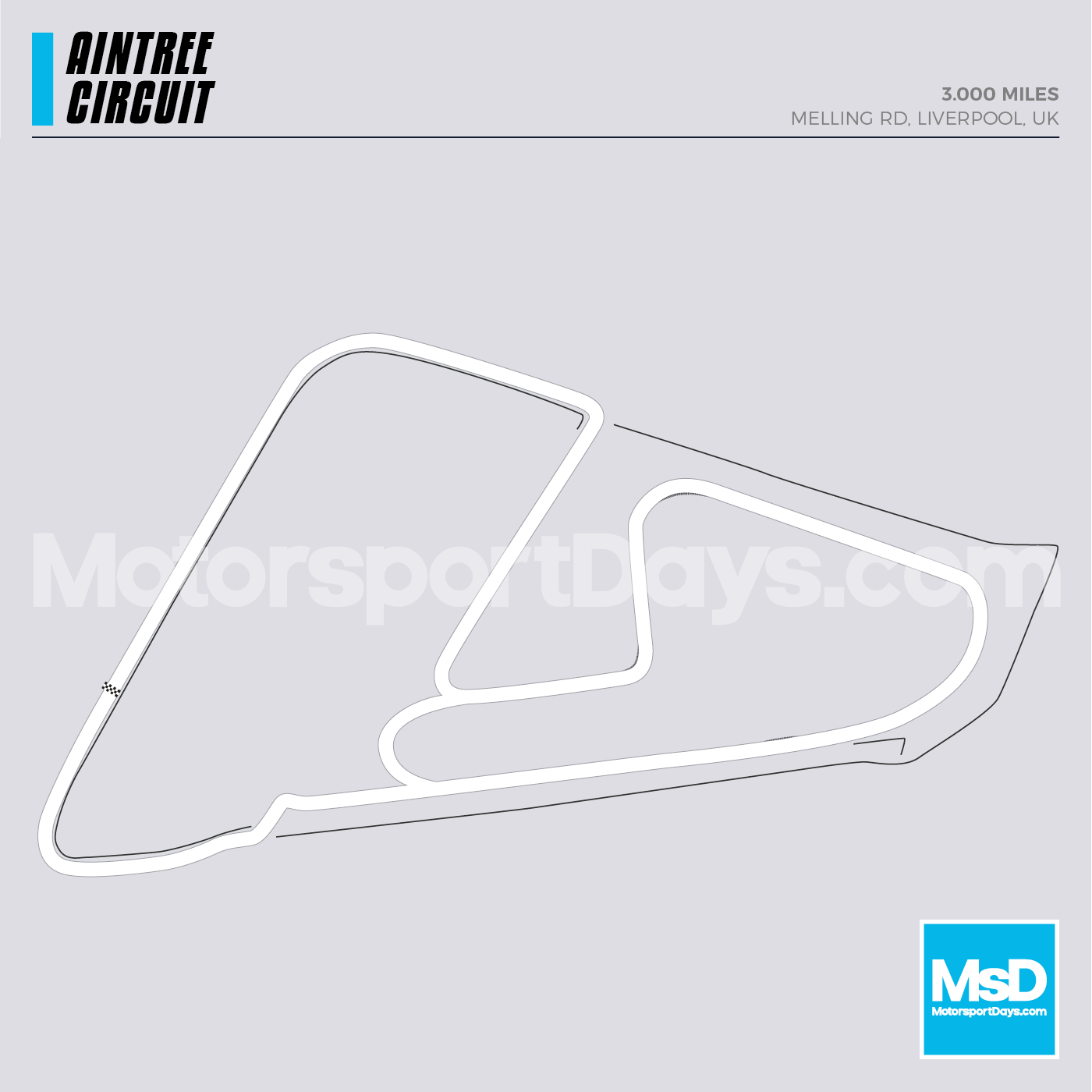 Aintree is famous for being home to the Grand National, but originally had a dual purpose similar to Goodwood with a motor racing circuit inside the horse racing course. It was the scene of Stirling Moss’s first Grand Prix win in 1955, which was also the first win by a Brit at a British Grand Prix.

Today, the circuit is half its original size and no longer crosses the Melling Road. It does, however, still offer its challenges and continues to hold sprint events and track days.

The first corner on the circuit is County Corner. A true right (or should that be left?) angle, it requires a later turn in than one might initially expect. As you approach, running close to the right-hand edge of the track, look for the start of the apex curb and aim to turn in as you’re almost level with it. Aim straight for the apex from this point, but try not to ride the curb too much as it’s quite unforgiving and can easily unsettle the car. Run out to the exit, but be careful not to catch the grass, and watch out for dirt dragged on to the track by others running wide. The Armco on the left is backed by a solid bank and is particularly unforgiving.

As you approach Village Corner, gently move across to the left of the circuit. This is another late apex that leads on to the long Valentines Way, so a good exit here is key to a good lap time. Aim to turn in about a car’s length before the access road to the left, get close to the apex curb on the right and then feed the power in as soon as the car has settled, but be careful not to do this too early as it tends to go on longer than expected. If you have to lift off to avoid running wide, you’ll kill your speed down the straight.

Valentines gives plenty of time to consider your line in to Bechers. The tightness of the two preceding corners can lead you into thinking this is going to be similar. However, the way the exit opens means considerably more speed can be carried than one might expect. There are two lines here, and which one you choose will depend on your car. The entry is the same for both (turn in as you get level with the access road to the right), but if you have a lot of power, aim to run as close to the left-hand edge of the circuit as possible post-apex. This will allow you to get on the power early, as you’re demanding less lateral acceleration from the tyres. It’s the long way round though, so with a lower powered car, your best bet is to hug the apex for as long as possible to reduce the distance covered.

The Railway straight is very open, and as such, is greatly affected by head or tail winds. Sit it out as best as you can, but be aware that your entry speed into the final corner, Club, may vary as the day progresses.

Despite being a hairpin, Club has a very wide entry. For this reason, you should run the car around the middle of the outside of the circuit until you reach the access road on the left. Turn in as this ends and aim for the apex. Keep lock applied until you see a small dark patch of tarmac, which you should place under the centre of the car. Continue to open the steering as the corner opens, exiting on to the comparatively short start/finish straight. Now gradually bring the car over to the right to begin the lap again.