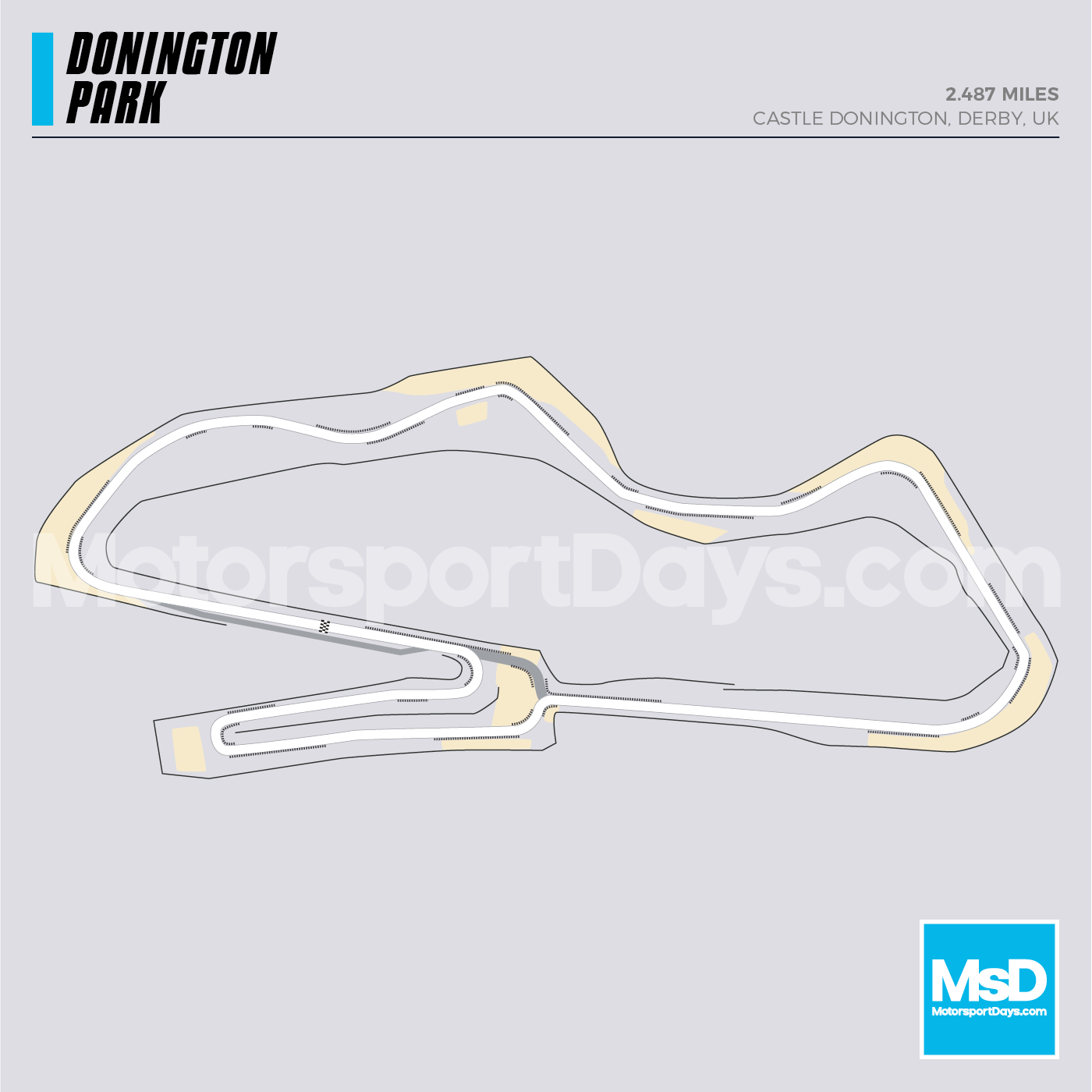 Donington Park (with one N!) was the first permanent park circuit in England, opening in 1931. During the Second World War, the track was requisitioned by the Ministry of Defence and it took until 1971 before the track was purchased by local man Tom Wheatcroft and turned back into the track it is today.

Coming down the Wheatcroft Straight past the start/finish line, the first thing to think about as you naturally move left is the pit exit. Traffic blends out of the pits at a much slower speed than the approaching cars on track and requires drivers to be alert on track days, test days and of course racing to avoid incidents.

As you drive past the pit exit, some drivers like to hook a wheel or two into the pit exit to give them an easier line into Redgate, the first corner. This approach works for some people but personally I have never found it necessary, mainly as Caterhams prefer to understeer, making corner entry more difficult. It is very important to get the car slowed down and depending on your skill level, trail brake into the apex. Don’t be tempted to gas up until you have made the apex and hold the car in until the end of the concrete access road that meets the apex. You can then apply progressive acceleration to arguably one of the most famous sequences of bends in the UK.

At the top of the Craner Curves is Hollywood, which isn’t really a corner in the dry for most cars, but in the wet most certainly is! I prefer to hug an inside line to shorten the run down the Craners, but more importantly set the car up for the crucial left-hander half way down. Depending on your car, this corner can be near 100mph even on road tyres and in the R300 it’s near 120mph.

Depending on your line through the corner, once you have composed yourself and the car, you have a very important corner in the  Old Hairpin. Not a traditional hairpin like Druids at Brands Hatch, but very important as you carry the speed all the way up the next hill. The key to a quick lap time is to make sure you have the car slowed ready for the right-hander. As you move back left onto the racing line, slow the car down, turn in and try and make sure you are ready to go on the throttle at the apex, or a metre before. However, all of this comes with a caution as the Old Hairpin has claimed many a victim! Drivers will frequently attempt to carry too much speed through this corner, run wide on exit and lose the car, which invariably fires them back across the circuit and into the wall on the inside of the circuit. Wet or damp conditions only increase the chances of this happening, so be sure to build up to it. You have been warned!

As you leave the Old Hairpin behind you, move right to open up the corner known as Starkey’s Bridge. It is normally easy flat as you take the curb on the inside, running the car to about a car’s width from the edge of the circuit on the outside. In torrential weather conditions there can be a stream running across the circuit right after the bridge, which can unsettle rear wheel drive cars.

As you near the top of the climb you reach McLeans. The approach to McLeans is a left kink, which isn’t really a corner but sets up the braking and line, so take the curb on the left-hander and drift to about a third of the track in from the left-hand side, under-braking as you slow the car down. Again, for those confident with trail braking, it is a nice corner to feel the weight of the car load up on the front, as you drive in on the brakes before taking the apex and applying power for the run up another short hill to Coppice.

Coppice is a right-handed, double-apexed corner, although you tend to only take the first apex. Depending on your car, it is better to start to apply the brakes before you reach the crest of the hill as the front axle will go light and impede your braking. Slow the car down and turn in taking the first apex. If you have the line and speed right you can pick up the throttle on the apex and run the car in the groove, which is generally two thirds of the way around the corner as you naturally drift out of the outside of the circuit. If you have it right you should find yourself meeting the kerbing on the left. As you drive down the Dunlop Straight you pass where the old Dunlop Bridge was located before DJ Chris Evans accidentally bought it at a racing memorabilia auction in 2012!

Your line into the next corner will depend on which layout you are driving. For the National Layout you will need to be on the left-hand side of the track. Make sure you slow your car down sufficiently and then as you turn into the right-left you will be able to accelerate through the Goddards chicane, carrying your speed down the start/finish straight to complete the lap.

Exactly the same principles apply if you are driving the GP circuit, my personal favourite. This time, approach the end of the straight on the right-hand side, slow the car down and fire the car through the left-right chicane, carrying as much speed possible on the run down to the Melbourne Hairpin.

This next corner is most definitely a hairpin and one a lot of drivers struggle with. You approach the corner going down a slight hill. Brake early, carrying some speed into the corner on the brakes if you prefer. From here it is incredibly important not to be greedy on the throttle. Stay off the throttle for a metre or two at the apex and let the car rotate around the curbs, making sure you take a tightish line out the other side for the run up the hill to Goddards.

Both the Old Hairpin and even more so Goddards are both corners that separate the men from the boys. Although they are both very low speed corners, there is more time to find here than taking about 3mph down the Craners! Goddards is now a left-handed, off-camber hairpin. In other words, the track is making it more difficult for you to take the correct line into the corner. Approach on the right-hand side, slow the car down sufficiently and then again turn into the corner, being very patient not to accelerate too soon. Let the car turn around the apex before applying smooth power and back down the start/finish line.