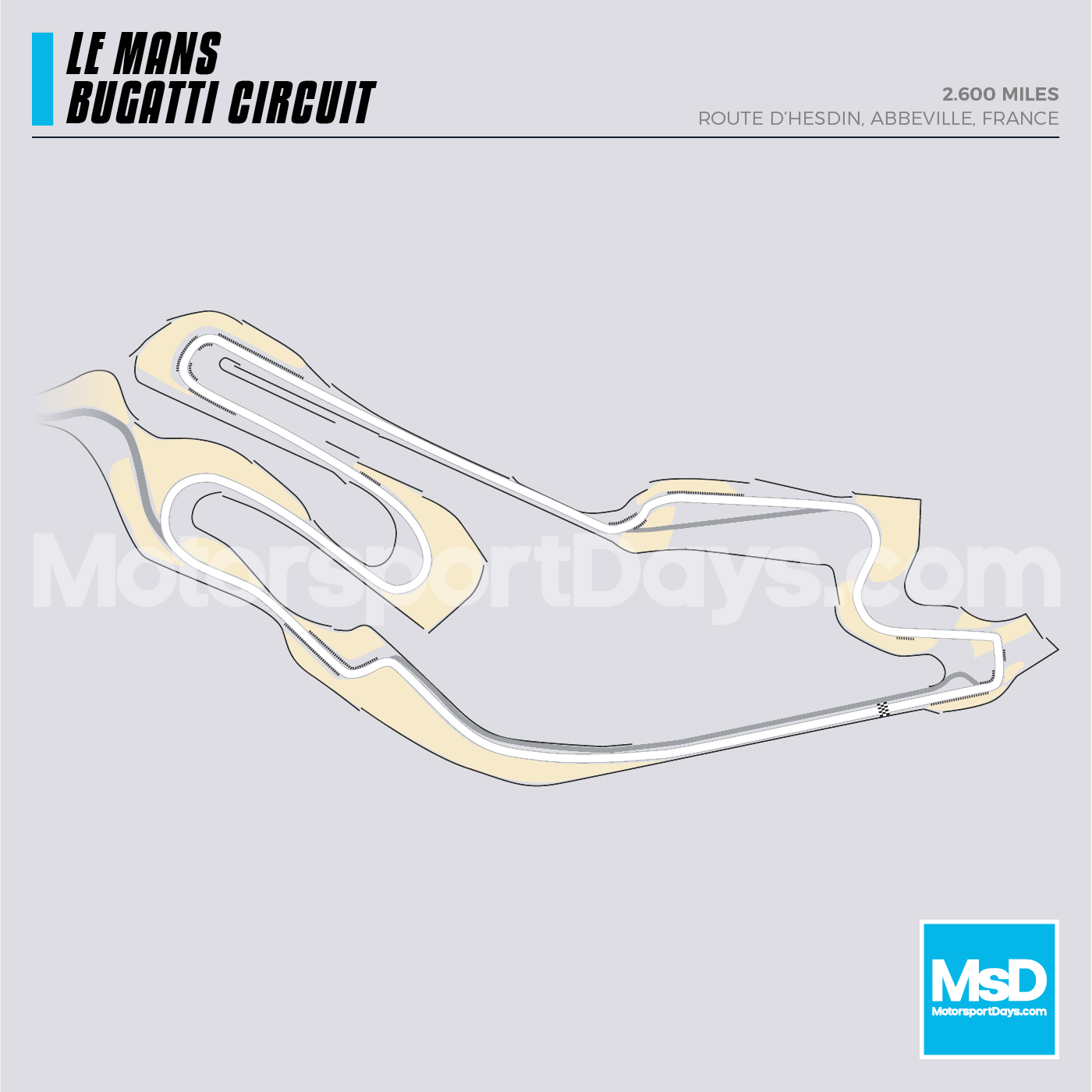 Circuit de la Sarthe in Le Mans is a racetrack with incredible history thanks to the legendary Le Mans 24 Hours race. I have had the extreme privilege of competing in this fantastic event twice and am delighted to say I had the honour of stepping onto the iconic podium having won this year’s event in LMP2 after taking pole position. It has, since those 24 incredibly tough hours, become my favourite circuit for obvious reasons! It is a mix between permanent racecourse for the first and part of the last sector, and public roads for the rest, with many iconic features varying from the long Mulsanne Straight to the daunting Porsche Curves. It is an incredibly unforgiving circuit and people say that you don’t actually win Le Mans, you survive it, which with the massively high speeds and very little run-off is about right! There is also variable weather in this part of France and at some point during the 24 Hours weekend there is always rain.

Turn 1 and the Dunlop Chicane

Entering from the far left, this is permanent race circuit and so is a good quality surface. There are some bumps on the braking to the chicane, which make it tricky but this is quite a basic corner. It was very special to drive here at the start of the race, as there is just spectators as far as you can see. It is also quite easy in the night as this area is very well lit.

Following on from the Dunlop Chicane you go down the Esses, which are very tricky. The first right is an easy corner but the left and right after that are very steeply banked and so it is very important to get your line. With no barrier on the outside of the last right it is very easy to run wide here, as many famous drivers have in the past with big consequences.

This is the famous Tetre Rouge corner where you go onto the first section of public road. This is a very high-speed corner, which is very easy to go over track limits on the exit as you try and get the best possible exit for the first leg of the Mulsanne Straight.

It is the first corner you come to where it is completely dark after being in the brightly lit Sector One, so it can be quite tricky in the night. However, the braking markers are very easy to see, as they’re reflective against the car’s headlights. After having so much driving before the race grip is not too bad on the road section of the circuit and this chicane is quite basic. We have to be careful with the kerbs in our prototypes, but watching a GT car on a qualifying lap through here is quite spectacular! Once again, with another long straight after, the exit is very important. A little bit more open than the first chicane, this is slightly higher speed and in the opposite direction being left, right, then left. Once again, there is nothing particularly special here, but it is always important to get that exit.

This corner is extremely tricky, as you are approaching at over 300kph and have to cross over the crown of the road whilst braking onto a different surface. There is also only gravel as a run-off and so if you make a mistake it can destroy your race. With such a long straight the exit is very important, but it is also a very good overtaking opportunity.

In my opinion the hardest corner on the circuit as you approach at very high speed, the circuit is very narrow and there is very little room for error. It requires massive commitment through the fast, banked right-hander before heavy braking for the next left. With only gravel once again on the outside and the barriers very close, if you make a mistake the consequences can be dire. It is very tricky in the dark, as there is no outside lights here, just the lights on the car.

Almost straight after Indy, this corner is very tight and again the exit is very important due to the long straight that follows. This is the slowest corner on the circuit and is very slippery compared to the others. The corner is very surreal in the night, as there is no other lighting and a lot of spectators here, and as it is very slow speed you can actually smell some of the spectators’ barbeques, which can be distracting! The Porsche Curves are some of the most iconic corners in the world. With the barriers very close, and massively high speed and commitment required, it has been the scene of many big accidents over previous years. You never get a chance to rest, braking down to 5th gear on entry and holding the car on a knife-edge through the whole complex. This is, along with the Esses at Suzuka, one of the most exhilarating complexes to drive at any circuit in the world. It gets very difficult behind GT cars here as it is very narrow, but we can actually pass them around the outside of the long right in the middle. In the night, as there is no external lighting and the barriers are very close, it feels incredibly fast. It is very satisfying when you exit as you can see the fun fair and the stadium section again where the circuit lights up.

The final complex on the lap is the Ford Chicane. The first one is a very quick left/right where you have to ride the kerbs. It is tricky in the night as it is very hard to see the corner, but once you have done a few laps you have got used to it. The last one is now very tight. Previously, you would pretty much straight line the last section. However, they have now put in very big kerbs on the apexes and so now it is a very technical corner. Although the straight after is relatively short in Le Mans terms, it is still quite long and so it is very important to get a good exit. When you come through this corner and see all of the people and the atmosphere in the night, you realise how lucky you are to have completed a lap at one of the most famous circuits in the world. When you cross the line here after 24 hours to win the race, it then sinks in just how difficult it was!