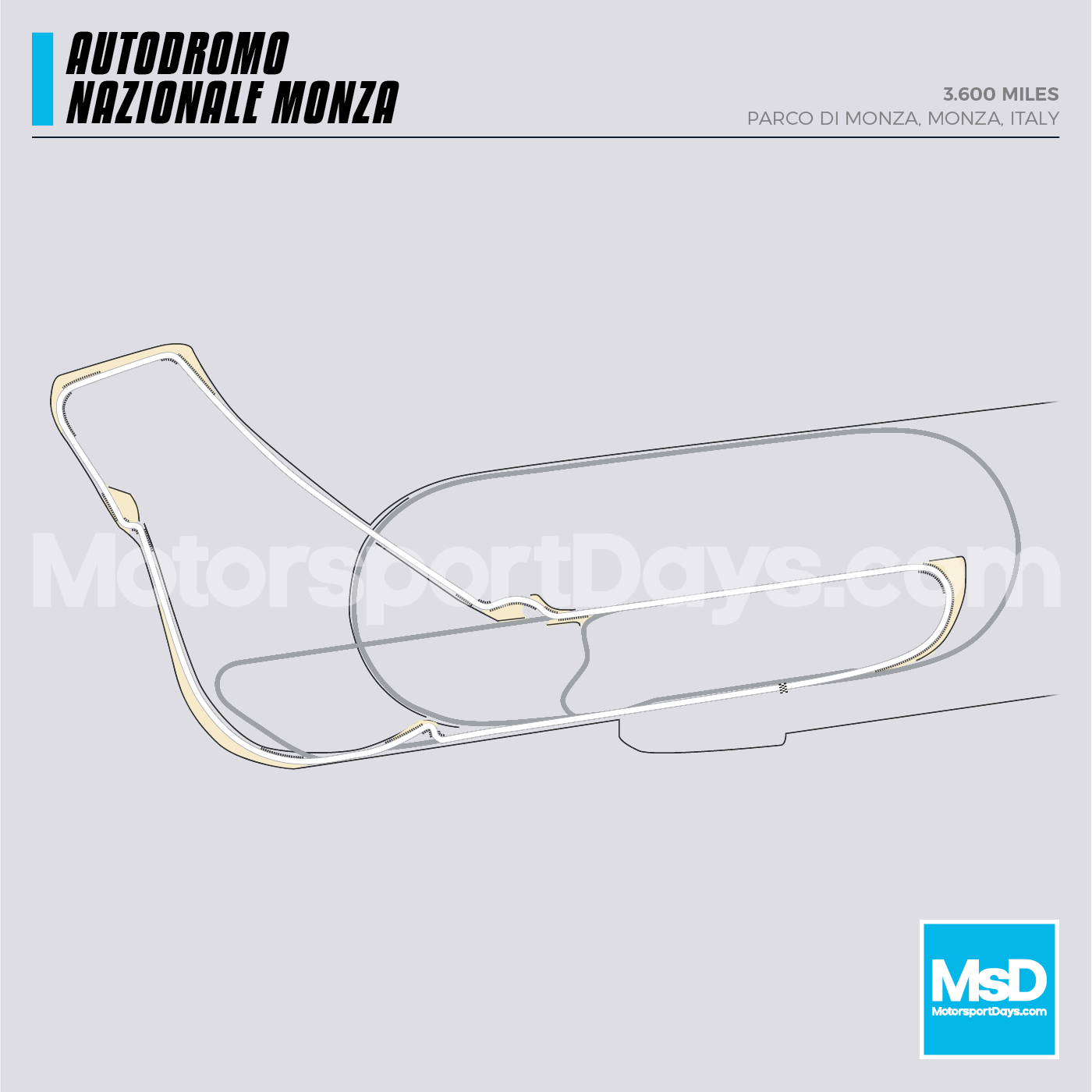 he Autodromo Nazionale Monza is a historic race track located near the city of Monza, north of Milan, in Italy. Built in 1922, it is the world’s third purpose-built motor racing circuit after those of Brooklands and Indianapolis. The circuit’s biggest event is the Formula One Italian Grand Prix. With the exception of 1980, the race has been hosted there since the series’s inception.

Built in the Royal Villa of Monza park in a woodland setting, the site has three tracks – the 5.793-kilometre (3.600 mi) Grand Prix track, the 2.405-kilometre (1.494 mi) Junior track, and a 4.250-kilometre (2.641 mi) high speed oval track with steep bankings which has been unused for many decades and is now decaying. The major features of the main Grand Prix track include the Curva Grande, the Curva di Lesmo, the Variante Ascari and the Curva Parabolica. The high speed curve, Curva Grande, is located after the Variante del Rettifilo which is located at the end of the front straight or Rettifilo Tribune, and is usually taken flat out by Formula One cars.

Drivers are on full throttle for most of the lap due to its long straights and fast corners, and is usually the scenario in which the open-wheeled Formula One cars show the raw speed of which they are capable: 372 kilometres per hour (231 mph) during the mid-2000s V10 engine formula, although in 2012 with the 2.4L V8 engines, top speeds in Formula One rarely reached over 340 kilometres per hour (211 mph); the 1.6L turbocharged hybrid V6 engine, reduced-downforce formula of 2014 displayed top speeds of up to 360 kilometres per hour (224 mph). The circuit is generally flat, but has a gradual gradient from the second Lesmos to the Variante Ascari. Due to the low aerodynamic profile needed, with its resulting low downforce, the grip is very low; understeer is a more serious issue than at other circuits; however, the opposite effect, oversteer, is also present in the second sector, requiring the use of a very distinctive opposite lock technique. Since both maximum power and minimal drag are keys for speed on the straights, only competitors with enough power or aerodynamic efficiency at their disposal are able to challenge for the top places.

It was also the venue selected by Nike scientists for the Breaking2 event, where three runners attempted to break the 2 hour barrier for the marathon. Eliud Kipchoge ran 2:00:25.

The Monza circuit has been the site of many fatal accidents, especially in the early years of the Formula One world championship, and has claimed the lives of 52 drivers and 35 spectators. Track modifications have continuously occurred, to improve spectator safety and reduce curve speeds, but it is still criticised by the current drivers for its lack of run-off areas, most notoriously at the chicane that cuts the Variante della Roggia.