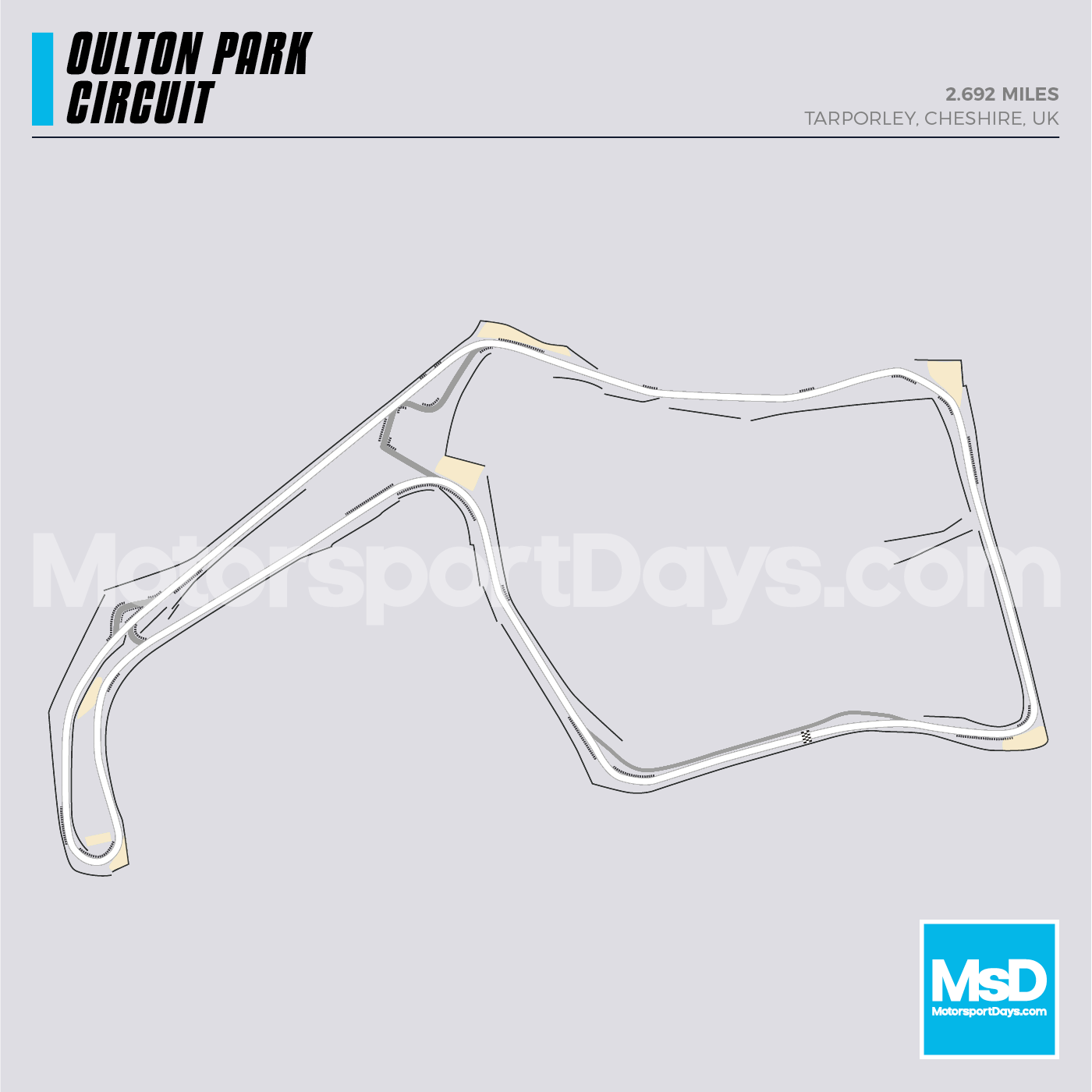 Oulton Park is the longest circuit in the UK, excluding Silverstone. It also has the steepest banked corner in the UK in the form of Shell Oils at 11 degrees. The circuit’s natural undulations and blind crests make this one of the most challenging circuits in Europe, both feared and revered by drivers on both two and four wheels. There is very little run off anywhere, so take your time – it is unlikely you will master the circuit on your first visit.

The start and finish straight, ironic in name given that it is anything but, leads to the first corner, Old Hall. On approach there is a seam in the tarmac that runs along the edge of the circuit, about a foot wide. Follow this all the way from the braking point to where the seam meets the main track and grass, then ease the car into the apex. Right by the drain try to avoid the kerb as it is a cowpat type. From the apex get back on the power and run all the way out to the exit, but be careful of the compression at the apex. The run through The Avenue, which is the fast right kink, is very scary as it is blind and the circuit falls away even more than you first realise.  It’s important to turn the car in just before the brow and apex adjacent to the marshals box.

Braking for Cascades is tricky, but it is imperative to either brake before or after the drop in the road. Annoyingly, the bump is probably about the right place to brake, but braking here is not an option as it will either cause you to lock up or cause the car’s ABS to engage, neither of which makes for a balanced car at the turn in. I would suggest a slightly earlier brake to enable a smooth turn in and to allow you to get back on the power as soon as possible. The turn in point is at the start of the escape road. The apex is a long way round the corner, about two thirds along the kerb again. Don’t use the kerb as it is a cowpat type.

The long the run down lakeside to Island is very up and down, and makes it tricky to see the corner until you are much further down the straight. Once again, a braking point is hard to pick, but the turn is is at the start of the Island Hairpin road on the right-hand side. From the turn in you be looking to the kerb on the inside as your apex is right at the end of it. Try not to let the car run out too far on the exit as there is not a great deal of space to get back to the left for Shell Oils. This means you will have to brake straight across the track as you come back from the right, the turn in point just after the marshals box works well as the extreme camber of the corner means you can carry a good amount of speed in. Hold the car down at a low apex before aiming out of the corner, looking towards the kerb exiting as straight as you can just before the crest.

There is a slight right kink in the road just before the Brittan’s Chicane, which means you approach from the left and hold to the right after the apex to give you an easy approach to the chicane. To be quick through here you must use a lot of the kerb on the left so that you can open the second part of the chicane, taking care not to clip the tyres at the right-hand side, and then use a small amount of the kerb on the left on the exit.

The run up and over hilltop precedes the fast approach to Hizzys (aka Knickerbrook Chicane). There are the 200 and 100 braking markers about half way between the two, and a very late turn in to make the first part tight, which will allow you to open up the second part of the chicane. Before the right part of Knickerbrook, bring the car back to the left as far as you can then turn in just before the end of the grass on your left. Take a small amount of the kerb at the apex just after the small crest in the road then let the car run all the way out to the left towards the kerb.

This leads to the steep uphill climb of clay hill. As you head up the hill you can’t fail to notice the Advan Bridge. You should aim to go under the letters VA in the word ‘ADVAN’, then looking straight ahead there is a tree line – looking towards these you should aim for the tallest tree as this will lead you to the right-hand side of the road where there is a small access road. You should turn in to the left-hander of Water Tower at this access road. There is an apex kerb on the left-hand side, but do not use this as it is very unsettling for most cars.

Keeping to the left and braking in a straight line for Druids, the turn point is the seam that runs across the track. Now there are two ways to deal with Druids depending on your car. The first is to ignore the first apex and aim solely for the second one. The other way is to take both the first and second, but this depends on your car and setup. From the second apex let the car run out, but be very careful with the throttle application as many a driver have fallen foul of the exit kerb and crest just on the exit of the corner.

The run down to the final corner of the lap is very undulating and like Island makes it tricky to actually see where you’re going. Pick a braking point near the arrow board and the turn is very late. Once you have turned the car in, the apex is between the two floppy markers on the inside of the corner. Be careful with the power, but let the car run out to the left of the track, being careful not to overrun onto the grass. The final corner of the lap is Deer Leap – not very much of a corner unless it’s wet – then be very careful of the painted grid hatchings.