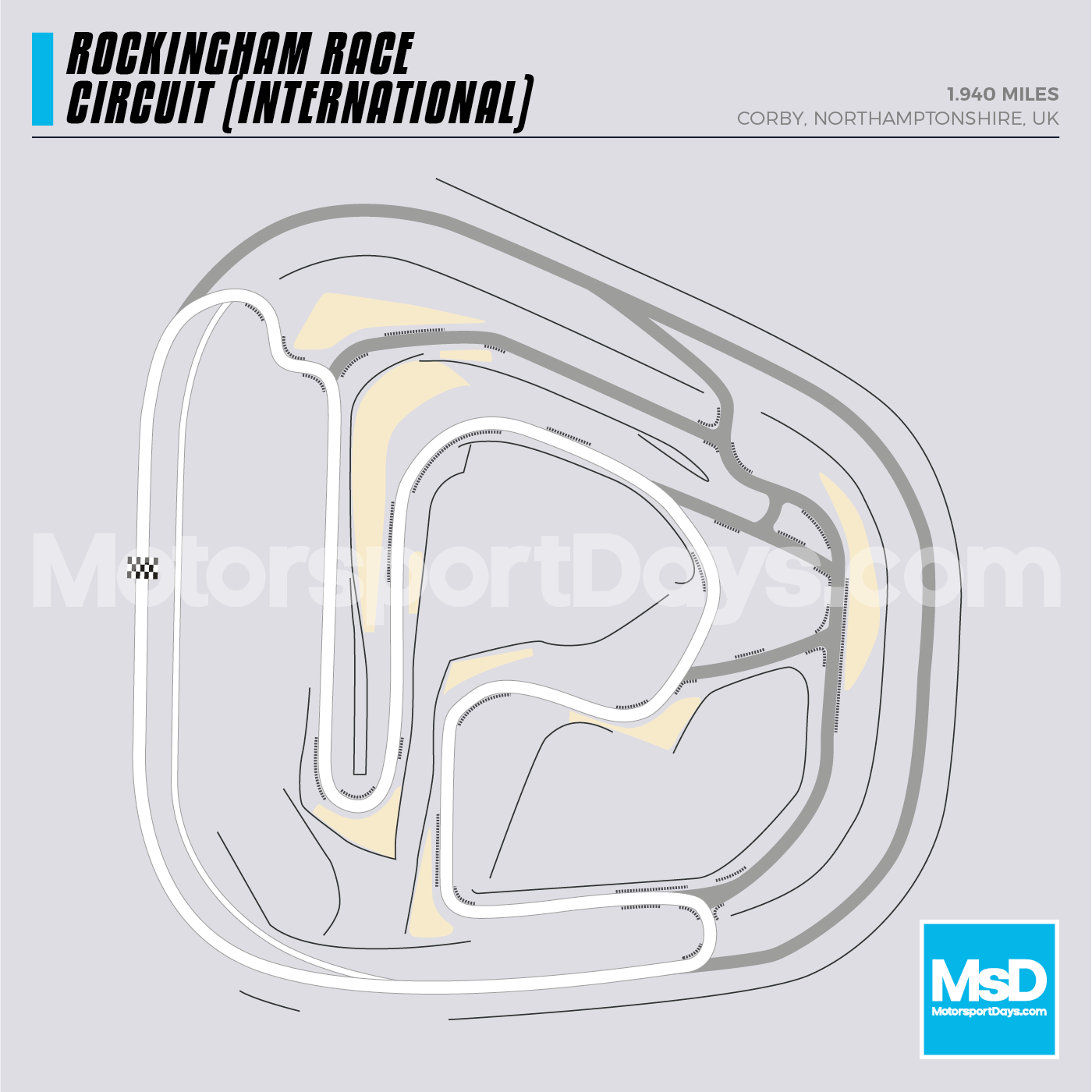 Rockingham is one of only two remaining purpose-built car racing tracks in the UK (the other being Oulton Park) and was opened in 2001. The lap record of 215.4mph, set on its rarely-used oval configuration, confirms Rockingham as the fastest track in Europe. There are currently 13 configurations of circuit at Rockingham, although most racing takes place on the International Super Sportscar Circuit or the slightly longer International Super Sportscar Long Circuit.

The start/finish line is in front of the imposing Grandstand and is part of the oval course. As such it is on a significant 3.5-degree slope from outside to inside. Turn 1 is the first part of the oval and in the dry can be taken flat out in most machinery. Beware in the rain, however, as Rockingham’s surface is notoriously slippy when it’s wet.

The first “real” corner is the left-handed hairpin at Deene. The track is extremely wide on entry, so aim towards the apex with your braking. Take care as you leave the banking and turn onto the flat infield track, apex late on the squarely cut corner, and make use of the exit kerb which has plenty of grip.

Turn 3 is Yentwood, which is a traditional 90-degree right-hander. Make sure all of the braking is done before the corner, as it’s slightly uphill as you exit and you want to be early on the power. You can then brake late for the right-hander at Chapman, which follows quickly, getting the benefit of the hill to slow you down, but how much space you use on exit will depend on your car. However you look at it, you’ll want to be well positioned on the right of the circuit for the start of the series of left-handers that come next.

First is “Pif” or “Pif-paf” (which is where the ISSLC diverges from ISSC), which leads into the second apex as part of the Short Linkand a final apex, requiring some braking first, or at least a balancing of the throttle, as you turn in to Gracelands. Rockingham counts this corner as 4, but however you look at it, it’s only three apexes and needs to be taken in a flowing manner if lap times are to be good. In particular, don’t get sucked in too deep for Gracelands, as the small crest can unsettle the car if you’ve not made it to the apex kerb. There is a wide exit kerb, although whether this will be officially kerb under 2014 rules remains to be seen.

Turn 9 is Tarzan, a wide hairpin right, presumably named after the rather more famous corner at Zandvoort on which it appears to be modelled. If you’ve had a good run through Gracelands, this can be a good place to pass, either under-braking or through cutting back if you find your route to the apex blocked. It is wide on exit and can be taken either with a mid-apex, or with a late-apex to get better drive onto the School Straight.

The lap finishes with a left-right-left chicane at Brook, to ultimately turn you through 180-degrees back onto the banking. Braking here is critical, as if you use too much track in the first left-hand part of the complex, you’ll end up too tight in the second left-hand part and won’t carry enough speed back onto the main straight. Stay wide to the right on approach and get the braking done before the turn in point. As a rule of thumb, use no more than half of the track width in the first left-hand part or the right-hand part before changing the direction of the car. As you return to the banking, expect the car to tighten up a bit (beware if it’s wet) and then let the car run out towards the barrier.

The start/finish straight (including turn 1 and down to Deene) is one of the longest flat-out sections of track in the UK. Make sure you get the throttle all the way open as soon as possible and tuck into the tow from in front.

Useful info: You can see the whole circuit both from the top of the pits and from the grandstand on the outside of the start line. A pedestrian tunnel links the grandstand to the pits, while car access is through two directional tunnels between turn 1 and Deene.