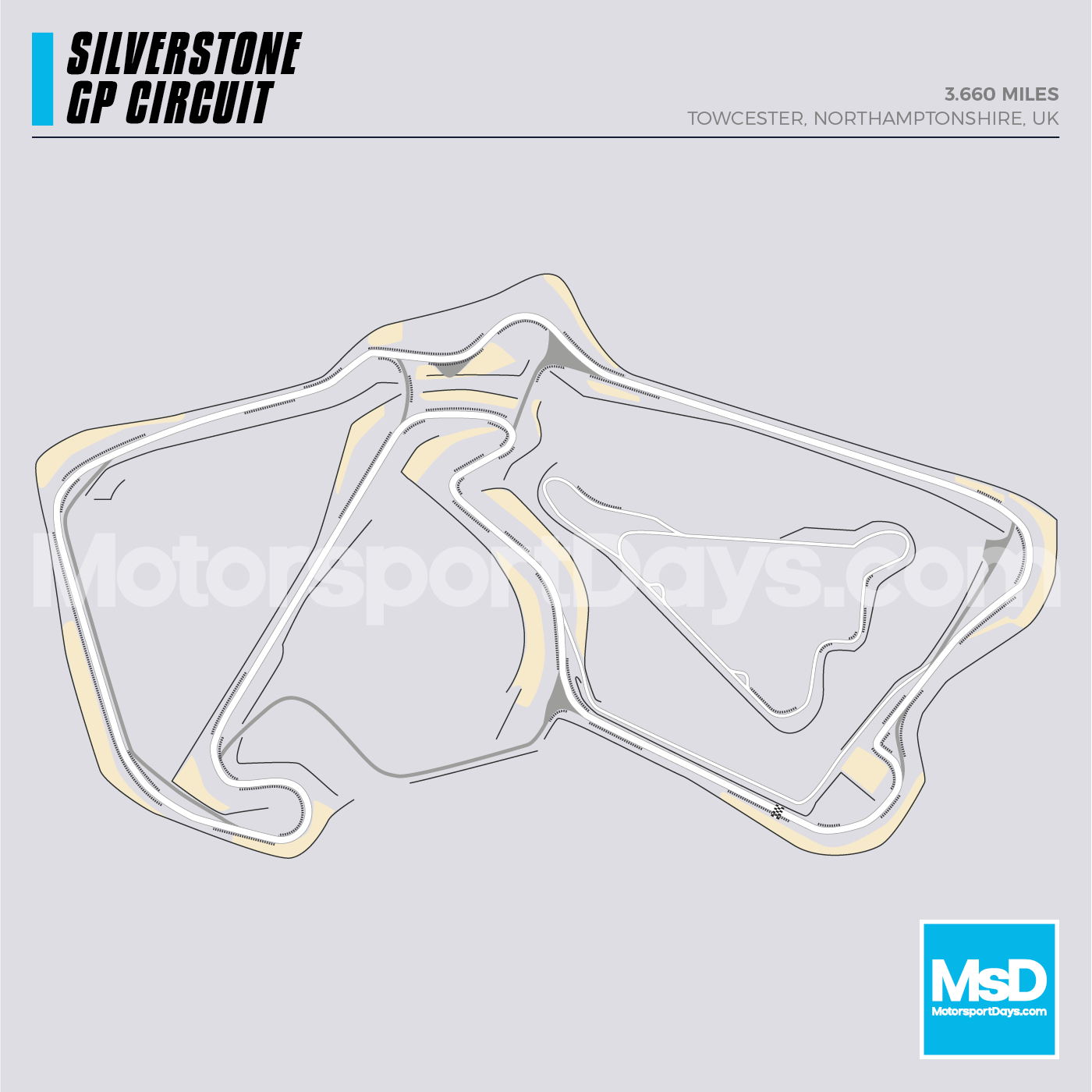 Silverstone was originally an old World War II airfield and held the first RAC International GP in 1948. It then went on to host the first British F1 Championship round in 1950. It’s a circuit that has been driven and tamed by many famous names in racing, in single seaters, tin tops and some rather specialised cars and bikes over the years. The home of British Racing and with 18 bends, the annual 300,000 fans that flock to watch the F1 must know something.

The current GP layout starts in the shadow of the new F1 Wing, erected and opened in May 2011. An iconic circuit that hosts all classes of racing from F1, through Classics to Motorcycle GP, it’s a hugely fast but nevertheless technical circuit. Speed is crucial and time can be made up with attention to corner strategy. With 18 turns on track, there is plenty of scope to improve speed on the straights with good balance and speed through the corners, improving times by huge amounts in the process.

Starting a flying lap, in the shadow of the Wing on the International Pits Straight is turn 1, Abbey, which in many cars will be a slight lift with a committed and almost blind turn. Use the apron of concrete to the left as the turn in reference point and with the car balanced carry as much speed into the apex using the base of the kerbing on the turn at Abbey. Allowing the car to run wide out of Abbey towards Farm Curve, the sensation is that there is only just enough space on the exit.

Through Farm Curve try and stay with the kerb for as  long as possible and if the car’s speed and balance will allow, use a little of the left-hand kerbing to hold a tighter line. Stay left for the turn into Village Corner, use the white line as a turn in reference marker, be patient on the throttle and try to clip the apex late. Move over most of the way to the right for a late apex turn in to The Loop. With the car rotated at the apex, accelerate hard through The Loop using all of the kerb to the right of the exit and stay wide to allow a fast entry and exit through Aintree, bringing you onto the Wellington Straight. Time along the Wellington Straight is made good by the entrance and exit through The Loop.

For Brooklands, the balance under-braking is vital to enable the car to carry as much speed into a late apex. The speed that you can carry through Brooklands will force you wide and to the right-hand kerb at the start of Luffield. Carry this speed into Luffield using the first part of the kerb on the right. Allow the car to run wide through the middle section of the turn. Get the car rotated to allow early acceleration out of Luffield and onto the iconic Woodcote turn, which is likely to be flat out by using the kerbing on the right.

Entering the National Pits Straight, the speed through Woodcote will push the car to the left-hand side of the straight in preparation for a blind and very fast turn into Copse. The corner is one to test your courage and car setup, as the speed through the apex and on the exit will have a massive effect on the speed carried to and through Maggots and Becketts.

Maggots is a fast entry from the left-hand side, using the kerbing to allow a fast turn to use the mid-apex point on the right. Carry this speed through to Becketts, trying to keep the left-hand side for the controlled right-hand turn, for a fast exit through Chapel and onto the Hanger Straight. Maintaining speed with patience on the throttle through the Maggots, Becketts complex is key.

The Hanger Straight at 770 metres long is fast and the setup for a fast entry turn to the slightly uphill Stowe Corner. Use the colours of the kerbing on the left-hand side as your turn in reference, and aim to clip the apex of Stowe later rather than earlier. There is plenty of run off space on the exit of Stowe. The run downhill to Vale requires a firm but late braking in order to balance the car into a late turn in to clip a late apex, so  the car remains balanced and ready for a mid-track right turn into the first part of Club Corner. With a long straight to follow and the fast Abbey turn, the exit from the second part of Club is vital as there is no significant deceleration until Village Corner almost a mile later.

The exit from Club Corner does lead to a wide exit onto the International Straight and as the Marshalls will testify, any bail out lift off over-steer normally allows you to meet the pit wall head on. So, if there is room and you run wide, stay there – the pit wall does not move for anyone.

For all your TRACK and TEST day needs, GP Racewear are based at Silverstone Circuit