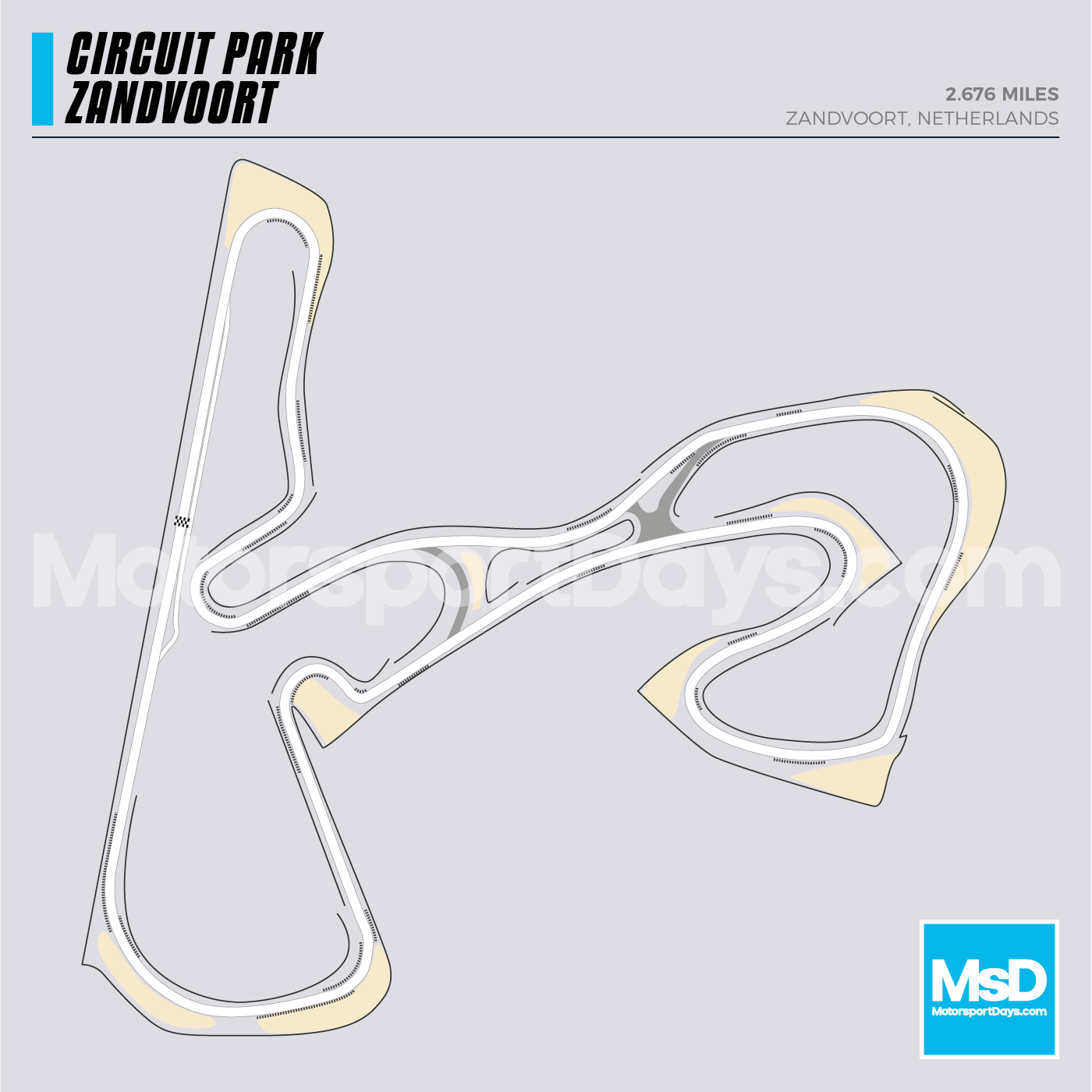 Circuit Park Zandvoort is situated 20 miles west of Amsterdam and 240 miles from Calais. Together with tracks such as Dijon-Prenois and Spa-Francorchamps it is amongst every track day fanatics favourites. The origin of the track dates back to World War II when service roads used by the German army, linked by newly designed bits of track, formed the layout. Zandvoort went on to host Formula One, Sportscar events, DTM, WTCC,… It’s 2.6 mile swerving, climbing and dropping layout make it a very exciting track.

The circuit is right by the beach, and at the end of the pitlane you’ll also find “Mickey’s bar” filled with motorsport memorabilia.

Now for a lap of the track. As you approach the first corner, which is a medium speed right hander and an exact semi-circle, you start braking at about 100 metres. Keep to the middle on the entry and touch the apex 3 quarters through the corner. But you’ll soon figure out that there’s more than one approach to this corner such as trail braking and making it a double apex corner. The inside curb is too aggressive to use, but the outside one on the exit is very accessible.

For the second one, cut across to the middle of the circuit for the next left-right combination. Turn in very late, so that you line yourself up parallel to the white line (and right next to it). Next up is the right hander, a short tap on the brakes will suffice in the Lotus, but make sure you don’t turn in too early as it’s easy to end up in the grass on the exit. Then, you can keep left for the next tight left hairpin. If you keep left, simply trail brake to the outside and cut back to a late apex, but you can opt to go back to the right hand side of the track for braking.

The track starts to climb now and you’ll have a blind crest up ahead, turn to the right smoothly and also stick to the right hand side of the circuit. There will be a patch of the track that’s painted, you can drive over this when it’s dry, but keep off it in the wet.

The next few corners make Zandvoort spectacular. A very fast left and right (blind) sweeping combo. Turn in for the left hander and stick to the left of the track on the exit (so don’t go in too early). The moment that you’re level with the service road (on the left) coming on to the race track, you turn in for the next right hander. Drive straight over the curbs you meet as they are part of one of the other circuit’s layouts. Just let the car flow to the left hand side of the circuit (you won’t actually see this when you are at the apex). Be confident that the circuit will be there!

The next right hander is called ‘Scheivlak’, one of Europe’s most fearsome corners. Keep to the left and cut in quite late. Touch the apex near the middle of the inside curb, maybe a bit later. And go back to left hand side as you exit, but prepare for a left kink. Just after the kink, go back to the left side of the circuit for an extremely satisfying right hander. A tap on the brakes, and an early entry to put you on the inside curb. Exit back to the left hand side. Keep as much to the left as you can for the next right hander, but braking can be a bit tricky as the track is not straight, but strafes to the right. The apex is right in the middle of the corner (and inside curb). You shouldn’t take too much of the inside curb though. Exit all the way to the outside, and guide the car to the right hand side of the circuit. The track sweeps a bit, but try and cross to the right in as straight a line as you can, otherwise you’ll only add yards to your trajectory. (You can try and drive straight to the marshal post you’ll see up ahead)

The next left hander has a later apex and will let you carry some speed through it. The apex is at the end of the inside curb and try starting to build up your speed as early as possible as you have a full throttle section ahead. The circuit will flow to the left, so move over to the left and stay there for the next heavy braking zone. Turn in so that you can still take a good amount of inside curbing, try and trail brake until just past the curb. Then, immediately turn left as the inside curb for this right hander is very accessible; it’s a very long corner so still try and make it a late apex. Start straightening out the wheel as soon as you can. Back to the right on the exit, you’ll feel a little crest that can make the back end step out a bit as you accelerate.

Cross to the left of the circuit for these final two right handers. The first one is medium braking at about 70 metres and a fairly early entry. The inside curb is very accessible, so use it! Straight back to the right on the exit, right next to the white line. Then, keep left for a bit as you are already entering the final corner. Move to the inside and aim for the inside curb as your apex, but you won’t actually see it when you commit to the corner. It will take a few laps for you to find the sweet spot as there isn’t a fixed entry point. When you’ve hit the apex, let the car flow to the left and start another lap!